From childhood, Keshava Murthy has worked with his father in his birthplace village, Mosale, Hassan District, Karnataka. He finished his first year degree in 1991. He studied Vaikanasa Aagama in Maharaja Sanskrit College in Mysore, Karnataka. After that he moved to Bangalore, where he worked for the next two years in Sri Venkateshwara Temple in Ulsuru, Bangalore. In January 1994, he got a golden opportunity to come to the USA where he worked for 18 years in the Hindu Temple of Atlanta in Riverdale, Georgia as the second senior priest. He resigned from his job on November 2011. For the next three years, he worked as a freelance priest in Atlanta, GA. With Goddess Sri Maha Lakshmi's blessings and devotees' support, he opened Sri Maha Lakshmi Temple of Atlanta in Cumming, GA as a Founder/President/CEO in June 2015. He speaks fluently in Telugu, Kannada, Tamil, and English. He has a wife, Manjula Murthy, and three children: Indraja Murthy, Achyuth Murthy, and Supraja Murthy. 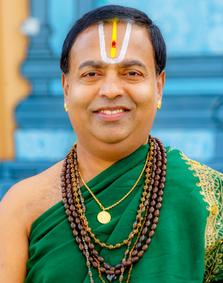 Our temple priests are dedicated, traditional priests who perform all Hindu Relgious services and poojas in the temple or the Devotees' place at your satisfaction.